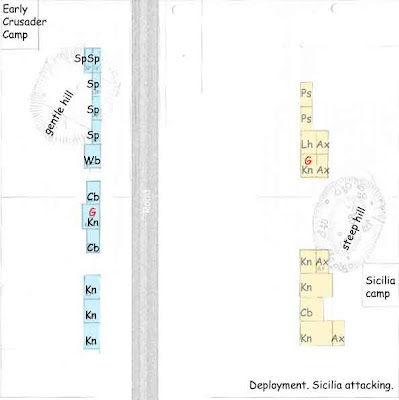 The Medieval Sicilians attacking heavy Early Crusaders. Deployment. Dear Fanatici, what do you think about it? Is this any good? Any plans? 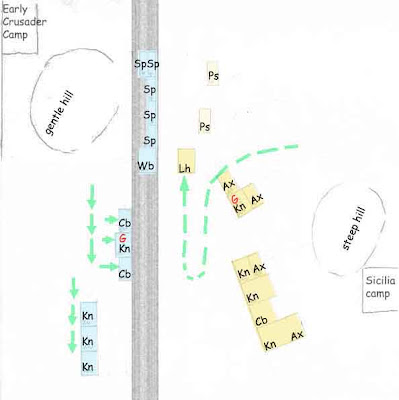 So this is the situation after three bounds.
Posted by Menic at 1:42 AM No comments:

This is the end situation of a short battle I played yesterday against myself. The Sicilians are the attackers, the crusaders lost by getting their General killed against a 6Kn unit and double overlap. It was the last sicilian bound. The picture shows all close combats resolved except the one against the Crusader General. 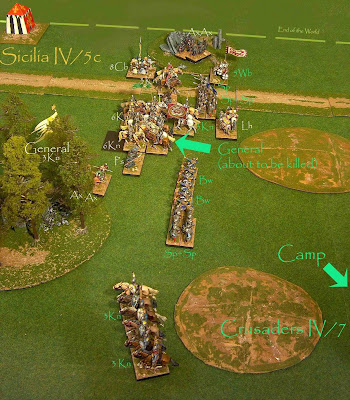 Big Problem #1: I barely have time to update battle#2, since battle#2 is recorded with a lot of work. As I suspected from the beginning: Not realistic for 7-24-hour-days-a-week. Please be patient. In the future I think I will resort to drawing maps, it's faster.

Big Problem #2: I've lost my notes for Battle #2. No kidding. I can't find them anywhere. Rats
Posted by Menic at 4:03 AM No comments:

I haven’t found out yet why these guys keep hitting each other. But this time the odds are better for Sicilia: the crusader general, a rather dim torch, chose a battlefield tailor-made for the good going troops of the sicilians. This battlereport comes in bounds. If you feel like commenting please do. When you click on the pictures, they get real big. 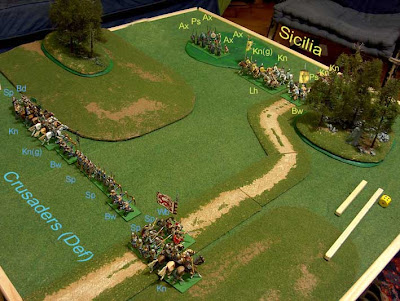 Sicilia deploys first.
-Left Wing: BwPsKnKn in column on the road. 1. Objective: threaten opposite enemy wing with a fast and strong thrust along the raod to disrupt crusader approach. 2. Objective: Take position before the woods, eventually to draw any enemy into bad going, the Knights help out in the centre.
-Right Wing: AxPsAx & AxAx, in two columns. 1. Objective: threaten to take the wooded patch on the crest of the hill and confuse/slow down enemy’s opposite wing. 2. Objective: confuse enemy’s opposite wing.
-Centre: Kn(g)LhKn in group. The Lighthorse are ready to go anywhere forward, the general and his knights just wait and see.

Crusader deploys next.
-Right Wing: WbSpSp in column and a Kn guarding their right flank.1. Objective: To block the road and set up a counterthreat. Roads are great for slow spears. 2. Objective: Fast forward, build a battleline and crush the enemy!
-Left Wing: BdSpKnKn(g). 1. Objective: Take the hill and neutralize the Woods 2. Objective: Help the Centre (Kn(g)Kn), secure the knights left flank (BdSp)
-Centre: BwSpSpBw in line. Build up pressure by closing in on centre battlefield, bows mow down any Knights. 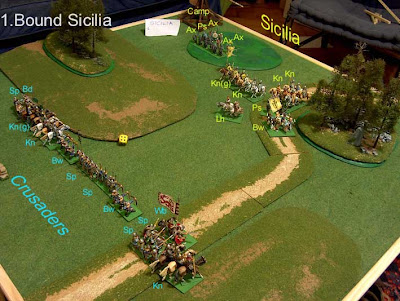 First Bound: Crusaders
- 6 PIPs
Not quite sure what is going on, the crusader general orders everybody to advance. On the right wing however the warband moves off the road to make room for the knights. So now there's a column of SpSpKn threatening the sicilian Bows. The general and his Knights secure the hill and the Blade and spear on the left wing try to reach the woods before the sicilian psiloi and auxiliaries. 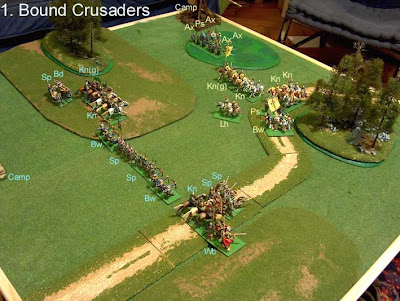 Second Bound: Sicilia
The Sicilians unfold their battleline. 5 PIPs where rolled and spent while forgetting the Light Horse in the middle of the road. The plan was to hold off an impending enemy thrust along the road thus binding his right wing with lesser troops and eventually pulling the fight into bad going. But the " f@°#ed-up Light Horse now demand for a change of plan, fast! The Knights start to build up pressure in the centre against the crusader phalanx of BwSpSpBw. If necessary they are ready to support the sicilian bows next to them.
- 5 PIPs
- Right Wing: the 2 columns of AxAxAxAxPs move forward towards the enemy general ("ZOC him!") partially leaving the woods (2 PIPs).
- Center: A column of two elements of knights leave the road and charge into the open between the two battlelines... (1PIP) while the Light Horse run off across the road (1 PIP)...and any subsequent move fatally overlooked by the general! All PIPs being spent the Light Horse got stranded on the road, now anticipating a fierce charge by the road-borne enemy, ayayay!
- Left Wing: The psiloi jump into the woods to provide a nasty overlap just in case the enemy should launch a fast attack along the road (1 PIP). 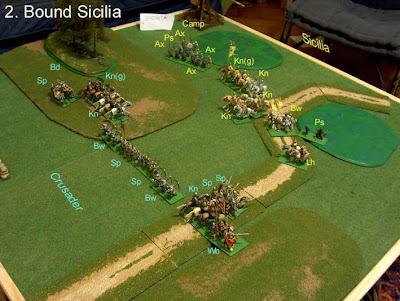 Second Bound: Crusaders
First blood!
Rubbing his hands after rolling a nasty 6 PIP the crusader general signales the column of SpSpKn on his right wing forward along the road to make döner kebab out of the sicilian Light Horse. But it didn't pull no punches, the Light Horse merely recoiling off the road. But now they got the woods right behind their backs! watch it, my berber brothers!
The rest of the crusader troops advance further once more, the blade and spear on the left wing finally reaching the woods.
The general and his knights wheel to the right to counter the approaching sicilian knights.
The Warband sluggishly pulls up on to the road again. 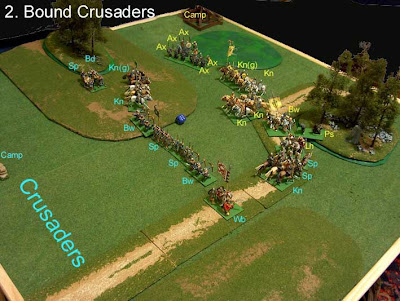 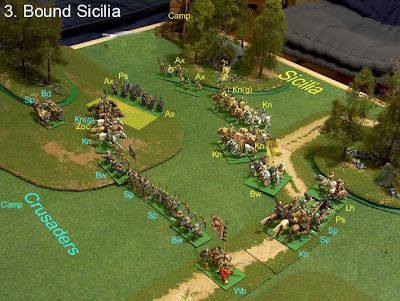 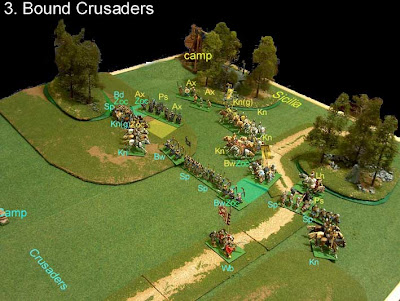 The following is a report by Petrù di Rometta, a sicilian monk who found himself in a tight spot:
"[...] Hearing rumours about our young prince passing through their lands the dark-clad assasins sent hostages and left their strongholds in the mountains to join our forces. The army was confident. [...]"
The Sicilian Army:
- a green prince from Apulia (3Kn General).
- The 100 Knights of Aragon, the household guard of the prince (3Kn)
- The Wild Muslim Horsemen (6Kn)
- Some unruly and proud german knights (6Kn)
- The Berber Bows from Agrigent (8Bw)
- The Berber Light Horse (LH)
- The fatimid Assassins from the mountains (4 x Ax, 2 x Ps)

"[...] But the crusaders stank. Even the lord must have held his breath that most unfortunate day. We saw their army drawn up in a long battleline. Their wing opposite to our right was concealed by a hill and a wooded patch in the distance. I stood amidst our forces behind our mighty prince there and heard him order the develish assassins(4 x Ax 2 x Ps) over to the right to make haste and to charge that hill. We could hear the clamour of armoured troops(4xSp), the shameful howling of fanatici (Wb) beyond and the boasting of enemy knights(3Kn) behind the trees.
I myself was feeling safe. The Knighthood of Sicilia is all around us and the strong Berber Bows(8Bw) and Light Horse are bound to shelter us from any evil. But, woe, our noble knights start to grumble as they see the enemy bows(2xBw) right in front of them. But the prince(3Kn) pulled his guard(3Kn), The Wild Muslim Horsemen(6Kn) and the german Knights(6Kn) together and told them his battleplan.
He had seen: the crusaders general stood alone amidst his heavy spears and the bows. The other enemy knights stood at the wings. So he decided to dare a glorious charge against the general after a slight wheel to the right, just enough as to avoid the bows. He counted on his Berbers(LH+8Bw) to his left to delay the enemy advance and give shelter for the knights. The Assassins (4 x Ax, 2 x Ps) were already climbing the hill, their banners flickering in the wind like black tongues [...]" 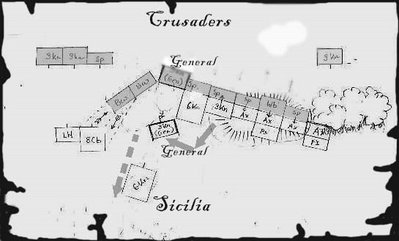 Hundreds of years later archeologists found a badly fragmented parchment in the latrines of a norman palace in Palermo. The experts believe it to be a rather clumsy schematic depiction of the battle (See picture on top of this post). The Situation looks something like this:
Attacker
Sicilian Battleline. The following elements are lined upnext to each other:
Sicilians left wing: Lh, 8Cb
Sicilian center: 6Kn 6Kn 2x(3Kn in column, the general as a reserve)
Sicilian right wing: Ax Ax Ax Ax with 2xPs support

But let's get on with Petú's account: "Confusion started when a number of Wild Berber Horsemen(6Kn) were brought down by enemy bow. Our muslim comrades fell back and as I looked they where already gone, swallowed by clouds of dust . Swiftly the enemy moved forward and pestered us even more with their arrows.
Then Aragon(3Kn) and the noble German Knights(6Kn) slammed into the wall of enemy spears and the earth opened and total mahem broke loose. The Assassins (4xAx and 2xPs) had barely secured the hill when the enemy stormed their position. Our left wing was still screaning us as the Berber Bows(8Cb) finally had managed to get close enough to the enemy bow.
But our bonnie prince saw with dismay that his plan was thwarted: we wanted to kill the enemy leader with the first charge. But we missed him! There he was in his stinking crusader cloak! Bellowing orders our prince moved his troops around the germans. But we could not reach him! Enemy bow held us back! But our german friends gloriously broke through enemy battleline and rushed down the hillside shredding the enemy spears.
On our right up along the ridge our allies fought bravely against the crusader tide and received the charge of the slobbering fundamental christians(Wb. Commander: Crazy Monk Georgius Guilhelmus Frutex) and several hundred speartroops (2xSp). They stood their ground.
Aragon(3Kn) was fighting hard. But the sword of Aragon was blunt that day. He charged enemy spears downhill and was pushed back - up the hill again. He didn't know where to turn his horse, he didn't know where to stick his sword! But the prince 's piercing glance sent him back to battle straight away and he fought bravely, recovered his former position and forced the enemy back. 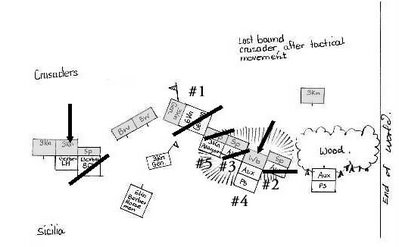 [the map shows the final crusaderbound after the movement phase. The numbers indicate the sequence of combat, I think 5 Elemnts got killed...]
"The fighting was fierce and long. Now my horse is dead, my tongue is dry and my troops are gone. I saw the end and fled the aftermath. I have seen my friends die and anything I ever wanted to live for. Our bonnie prince is gone! And I only live to tell the tale. But to fulfill my initial pledge I will relate the last deeds and final stages of this lost battle.
I saw Assassins' fire eventually cease, trampled under foot of the fanatici(Wb) and the tightly packed frankish spearwall. The hill was lost, enemy foot closed in on us.
I saw our Berber Bows(8Cb) and light Horse(LH) bravely receive a charge by the enemy knights and spears. The Berber Bows' standard fell and the Light Horse recoiled and thus our left wing collapsed.
I saw the enemy general(3Kn) attack the impetous Germans(6Kn). They frantically turned but our noble friends where swept away, straight into the enemy and perished [...]"
So far Petrú di Rometta. This looks like a 4-2 crusader victory (crusaders: 2ax+1kn+1Cb sicilians: 2Sp)). History tells us the prince of Sicilia perished in battle. He probably got dragged off to Antiochia and sold to Aleppo. He probably ended up in a harem or something.